Earlier this year, USAID published a report titled “Kenya Justice Project Implementation Guide – Dissemination of Lessons Learned: Enhancing Customary Justice Systems in the Mau Forest, Kenya.” This is perhaps one of the best reports about a project I’ve read in awhile in terms of the practical tips it offers for implementers. The report contains information on introducing the project to the community, choosing the right local staff and trainees, conducting a needs assessment, and designing an exit strategy. In addition to containing useful information about the curriculum, the report provides advice on how to be inclusive of ethnic majority and minority communities and how to structure the training in a way that the community can be more accepting of women’s rights. Check out some highlights below: 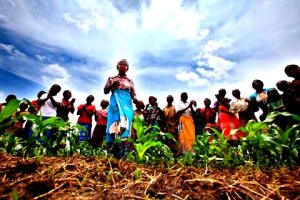 The Kenya Justice model aims to improve women’s access to customary justice related to land through engagement with chiefs and elders, women, and youth. The model uses a combination of legal literacy and skills trainings, peer sessions, community conversations, and public information activities to increase legal knowledge around constitutional rights and responsibilities related to land and transform the community and traditional leadership into supporters of women’s land rights.

Women leaders:  Training women leaders, who are then encouraged to share their training with other women in the community through peer sessions, increases women’s knowledge of and ability to advocate for their rights.

Youth and teachers:  To reach the adult population in the community, the vast majority of whom are parents, the project trained youth and teachers who then developed and delivered a justice curriculum to students at the local primary and secondary schools. Working with youth and students also ensures that the younger generation is aware of constitutional rights and responsibilities related to land and access to justice.

The training curriculum focused on civic education around the Kenyan justice system and the role of customary institutions; legal literacy with a focus on the Constitution and National Land Policy; and, for some groups, skill building around mediation, and/or public speaking.  Lessons from the trainings were solidified through mentoring sessions and community conversations (facilitated dialogues among participant groups), which provided the space for discussion and reflection on the information learned in training sessions.

The evaluation revealed that the Justice model generated many improvements across justice-related indicators:

Results of Evaluation One Year After Training

Overall, representatives indicated that the community continues to embrace principles of gender equality and access to justice, citing these examples:

A preliminary situational assessment on land and justice in the region in which you intend to work needs to identify key land- and justice-related challenges in the area, such as conflicts, weak governance institutions, inequitable access to resources, increased interest from outside investors, lack of knowledge around rights, and environmental degradation.  It should also identify formal and customary actors and any other stakeholders in the areas (e.g., private investors in land) and assess their roles in land management and delivery of justice services.  The extent to which these actors appear open to, or hostile towards, the themes of the project should be considered. Finally, the assessment should include a mapping of community-based and civil society organizations, government, and/or donor projects in the region that may have an impact on land rights or access to justice.

Interviewing Stakeholders: All of these subjects must be understood from the perspectives of all key stakeholders, including women.  Thus, the same questions must be asked of, for example, elders and chiefs, women, and youth in separate focus group discussions.

Based on the initial assessment, select a site by considering the following issues:

Once you have selected your implementation site, you will need to conduct a more targeted assessment focused on the specific community you have chosen.  The site assessment will identify individual and institutional stakeholders, including all land and justice actors; identify specific procedures of the local, traditional dispute resolution mechanisms and barriers to accessing that system; ascertain specific land and justice-related issues and challenges at the site; and assess the degree of women’s access to the justice system, autonomy, and empowerment.  This information will help you refine the training curriculum and identify participant trainee groups and individuals with whom to work.

Ethnic & Religious Diversity: Where your partner community is ethnically diverse and/or comprised of people of multiple faiths, ensure that there is a balanced ethnic and religious composition among participants.

Disabilities & Other Marginalized Groups: To the extent possible, include individuals with disabilities and other marginalized groups, and make efforts to accommodate their special needs.

Women Leaders: The identification of women participants is primarily based on a demonstration of leadership qualities, as evidenced by their leadership or significant contributions to women’s community-based organizations or in other settings where women have come together.  It is not necessary for men in the community to recognize a woman as a community leader, only that other women recognize her as one of their leaders.

Youth: They will be working extensively with children on the justice-based arts program.  As such, youth participants, both male and female, need at least a secondary school education.  Given the time commitment involved, we recommend that the youth not be formally employed.

Highlights of a Few Activities Conducted During Training

Community Conversations: The KJP model relies extensively on the “community conversation” method and is introduced as part of each group’s training modules, e.g., the conversations are facilitated among elders and chiefs only, youth only, and women only.  These conversations are an opportunity for participants to set aside the formal laws and share their reflections, concerns, and questions about what they have learned thus far.  It is an opportunity to discuss how the constitutional principles interact – or not – with their customary law and traditions and how they feel about that.

Court Visits: Few rural residents, including elders, have first-hand experience attending a hearing in a formal court.  Thus, it is more difficult to conceptualize the linkages between formal and informal justice systems.  This activity is designed to raise participants’ understanding of formal court proceedings and compare them with informal proceedings.   After all participants have completed their trainings, representatives from each group travel to and attend a formal court hearing, with the legally trained facilitator accompanying them, followed by an opportunity to interact with the presiding judge or magistrate.  Ideally, all participants can join in the court visit, but budget constraints may require that only representatives of each group do so.

Tip – Visit by Judge to the Community: Consider inviting the participating judge or magistrate to the community, following the court visit, to observe an elder hearing.  The purpose of the community visit is to provide another opportunity for exchange but this time focused on informal justice.  It may also provide valuable insights for the judge and be the beginning of a long-term relationship between the judge and the elders.

Mentoring: At least three mentoring sessions for each group follow the legal literacy and skills trainings. Mentoring sessions led by the facilitators provide flexibility for the project to meet the specific but unanticipated needs of each group.  They provide additional time to address group-specific questions that are less relevant to the other groups.  They also are an opportunity for the participants and the team to hone in on specific topics or issues of particular interest or concern to the participants.  Mentoring sessions differ from conversations in that they are additional time set aside for more in-depth training whereas conversations are an opportunity to set aside the curriculum and reflect on how the curriculum intersects with participants’ lives.

Tip – Elders: Particularly for elders, following the court visit, devote at least one mentoring session to discuss the scope of their jurisdiction, i.e., civil and criminal, and a second session on procedural aspects of resolving disputes. One mentoring session for the pilot elders focused on helping them figure out the appropriate scope of elders’ jurisdiction, i.e., civil versus criminal cases.  The elders decided that criminal cases against a person (rather than property) such as rape were outside their jurisdiction and in all cases would be referred to the police.

Including Husbands: Before activities begin, convene at least one meeting (ideally, periodic meetings) with the husbands of women participants. This meeting will provide an opportunity for the team to explain the project and allow the husbands to ask questions, air grievances, and provide feedback.

Cultural Context: The Justice model is likely to be implemented in communities where, for the most part, women have limited to no public role in the community and no leadership roles.  Typically, girls are taught at a young age to be seen and not heard.  As a result, women often fear speaking in public and, if they do speak, they may feel rushed and that their words are being ignored. Given these circumstances, the public speaking curriculum is designed to begin building women participants’ skills to speak and confidence to lead in public meetings. The curriculum is grounded in the human and constitutional right to self-expression, which is included in the legal literacy trainings.

Some project monitoring indicators may include:

Three Ways to Evaluate Completion of the Project

Discussions may be organized around different stakeholder groups but ultimately, project staff should decide whom to include in each discussion based on their insights about group dynamics. These conversations should be semi-structured, with guiding questions established in advance, some of which may be tailored to the specific group.

Community Surveys: If the resources are available, the broader community can also be surveyed to assess not only how project participants’ experiences and perceptions were transformed, but also how much the project has affected the wider community.  In this scenario, a sample of households is selected to be included in the survey. The same households are surveyed at the beginning and end of the project to assess how much the project has affected the broader community’s attitudes and behaviors. If resources are available, baseline and endline surveys in a control community—a similar community that did not participate in the project and would not have been affected by it—can provide even stronger evidence about the effects that are specific to project intervention.

Annexes at the end of the Report Include

This entry was posted on June 3, 2015 by Christina in Informal Justice Systems, Reports, Women.