New Law Strengthens Native American Justice System in the US

Last March, I took a road trip from Washington, DC to Arizona and along the way I stopped at Native American towns and reservations in Oklahoma, New Mexico, and Arizona. I had a chance to see tribal court buildings up close and spoke to many community members about the justice system and what some of the biggest challenges were in the community. Interestingly, the Washington Post published an article over the weekend on a new law by the US Government allowing Native Americans to prosecute non-Indians in their courts. With many programs seeking to strengthen the customary justice system or link the formal and customary justice system in other countries, I thought it was really interesting to see how the US is recognizing tribal justice systems within our own borders. View the excerpts below or read the full article here: Arizona Tribe Set to Prosecute First Non-Indian Under a New Law.

[Side Note: Last year I interviewed a rule of law practitioner who used Native American alternative dispute resolution mechanisms to strengthen justice systems in South America. You can check out that interview here!] 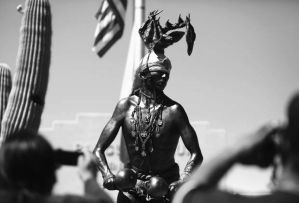 About three weeks ago, at 2:45 a.m., the tribal police were called to the reservation home of an Indian woman who was allegedly being assaulted in front of her two children. They said her 36-year-old non-Indian husband, Eloy Figueroa Lopez, had pushed her down on the couch and was violently choking her with both hands. This time, the Yaqui police were armed with a new law that allows Indian tribes, which have their own justice system, to prosecute non-Indians. Instead of  telling him to leave the reservation, they arrested him.

Inside a sand-colored tribal courthouse set here amid the saguaro-dotted land of the Pascua Yaqui people, the law backed by the Obama administration and passed by Congress last year is facing its first critical test. The Pascua Yaqui, along with two other tribes chosen by the Justice Department for a pilot project allowing the prosecution of non-tribal men, received the go-ahead to begin enforcing the law a year ahead of the country’s other 563 tribes because tribal officials made the case they were able to protect the rights of the accused.

Some members of Congress had fought hard to derail the legislation, arguing that non-Indian men would be unfairly convicted without due process by sovereign nations whose unsophisticated tribal courts were not equal to the American criminal justice system.

Against that opposition last year, the Obama administration was able to push through only the narrowest version of a law to prosecute non-Indians. While it covers domestic and dating-violence cases involving Native Americans on the reservation, the law does not give tribes jurisdiction to prosecute child abuse or crimes, including sexual assault, that are committed by non-Indians who are “strangers” to their victims. In addition, the law does not extend to Native American women in Alaska.

Still, what will play out over the next months on the Pascua Yaqui reservation is being watched closely by the Justice Department and by all of Indian country. The tribe’s officials are facing intense scrutiny and thorny legal challenges as they prepare for their first prosecution of a non-Indian man.

Beginning with the 1934 Indian Reorganization Act, Indians were encouraged to set up their own tribal courts. There are now 324 tribal courts on sovereign Indian land across the country. Most of the courts operate like other U.S. courts and have similar laws and court procedures. But many of them also use traditional Indian culture to help resolve disputes, including elders councils and sentencing circles. The Navajo Nation has a traditional “peacemaking” program. The Tulalip Tribes send first-time and nonviolent juvenile and young adult offenders to be counseled by a tribal court elders panel, which may recommend community service and treatment instead of jail.

Along with about 5,000 members of the tribe, many non-Native Americans live or work on the reservation, often dating and marrying Indian women. While some Pascua Yaqui speak their native language, almost all speak English and Spanish. Given the diversity, it was critical to be able to prosecute any men who abuse Indian women, Urbina said.

At the western edge of the reservation, the gleaming Casino del Sol resort brings in money for the tribe. But the casino, along with an older gambling hall down the road, is also a key to protecting criminal defendants, Urbina explained. All employees at the casinos, including whites, African Americans, Hispanics and Asians, could be tapped for jury duty so that the pool would not be composed exclusively of Native Americans, Urbina said.  The 500 non-Indians living on the reservation could also be called for jury duty, along with non-Indians who work for the tribal government.

Tribes that prosecute non-Indians must have a judge with a law degree, and in his office behind the Pascua Yaqui tribal courtroom, Judge Melvin R. Stoof has the requisite degree from the University of New Mexico School of Law on the wall, along with a photo of himself beside Attorney General Eric H. Holder Jr. On his desk, he also has a photo of his grandfather, Joseph Running Bear, wearing his powwow ceremonial feather headdress.

A member of the Rosebud Sioux tribe, Stoof remembers reading in law school about the 1978 O liphant v. Suquamish Indian Tribe case in which the Supreme Court held that Indian tribes had no legal authority to prosecute non-Indians who committed crimes on reservations. “I never understood the logic of it,” said Stoof, 57, who wears his long gray hair tied in a ponytail. “The Supreme Court found that tribal courts couldn’t have jurisdiction over non-Indians because they were aliens and strangers. They didn’t participate in the political process, didn’t vote in elections and weren’t residents.

For the next nearly four decades, as Stoof served as a lawyer and then a tribal judge on 10 different reservations, he watched in frustration as non-Native American men committed crimes against Indian women and were never punished. The tribes couldn’t prosecute, and the federal government, which did have jurisdiction, wasn’t taking the cases, he said.

“For a long time, the federal government was not prosecuting these crimes and they didn’t have to give any reason for declinations,” Stoof said. He said this was partly because some reservations are rural outposts and hundreds of miles from a federal courthouse. In other cases, federal officials and the FBI might not trust that the tribal police did a good enough job investigating and preparing the case, he said.

In Stoof’s home state of South Dakota, he said, the federal government declined about 80 percent of assault and battery cases against non-Indians. But Stoof said that the number of cases declined by U.S. attorneys has dropped in recent years because the Justice Department has made an effort to prosecute more cases in Indian country.

Last year, in its first report to Congress on prosecutions, the Justice Department said U.S. attorneys declined 31 percent of all Indian-country cases submitted for prosecution. Now, Stoof is set to be the first tribal judge in the country to hear a tribal criminal case against a non-Indian in 36 years.

The challenges will come from Melissa Acosta, a Mexican-American woman from Tucson who commutes to the reservation every day and serves as the tribe’s chief public defender. Many tribal courts cannot afford their own public defender and have only “advocates” without law degrees to defend the accused. The Yaquis wouldn’t have been given the green light from the Justice Department to launch the pilot project without Acosta, a longtime public defender.

Pascua Yaqui Victim Services Manager Canada Valenzuela said that women in the middle of domestic violence cases often want their husbands or boyfriends to come back home and not be sent to jail. Dismissing some of the first cases was “very disappointing, but you have issues in almost all domestic violence cases, especially where those relationship dynamics are still going on,” Urbina said. “It’s probably more difficult on reservations where it’s a small community, folks all know each other and many are related.”

“When you do not have an adequate system of justice or laws, it creates a perception of lawlessness,” Urbina said. “In the past, I have had to face whole families and explain that we could not provide the full measure of justice their loved ones deserved. When you have decades of this legal sickness festering in tribal communities, it has a tremendous impact on the health and wellness of tribes.”

This entry was posted on April 22, 2014 by Christina in General, Reports and tagged Customary Justice, Pascua Yacqui.