Today, when you take a look at democracy and rule of law programs, many projects focus on empowering and supporting women. The National Endowment for Democracy, for example, supports organizations that promote women’s rights through sports, education, and advocacy in Côte d’Ivoire. The Open Society Foundations supports a project in Afghanistan to help women get free legal aid and representation. When I was at the American Bar Association, I researched projects that could help women access the justice system in South Sudan. As I did this research, I looked for innovative programs in other countries and then began to wonder how women in the US achieved the rights we are helping other women fight for abroad. To answer this question, I looked back at the US women’s movement in the late 1800s and early 1900s and again in the 1960s and 1970s and learned quite a few interesting things. 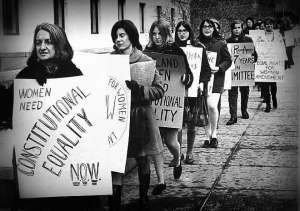 The National Women’s History Museum reports: in the late 19th and early 20th centuries, as women expanded their roles outside the domestic sphere and into the public arena, they found no images in the mainstream political culture that spoke to women’s experience or conveyed women’s political objectives. Creating a powerful political imagery was crucial to establishing a political presence in the American public’s consciousness and in bringing about the acceptance of voting rights for women. American women used materials rooted in American traditions as well as others borrowed from the British suffrage movement and adapted it to American usage.

[The] American suffrage rhetoric based on motherhood and the “special” qualities of woman’s nature became almost universal. Themes of women as moral arbiters of society, keepers of cultural tradition and agents of cultural transmission, nurturers of children, philanthropists to the less fortunate, and mothers of the race were extensively emphasized. These themes fit perfectly with the prevailing cultural concepts, held by both men and women, about the role of women in society. 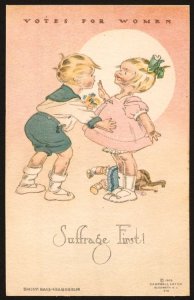 Society was to be uplifted by woman’s higher moral nature (superior to that of man, so the concept held) as that morality was infused into the social and political system. Political and social reform became a moral and civic necessity that would enable women to carry out effectively the work of “woman’s proper sphere.” Rather than intruding into the male sphere, the rhetoric stressed that woman’s sphere was expanding outward to include the community and the nation as the larger “home.” Women needed the ballot, so the mainstream argument went, not because they sought to intrude into the male sphere of activity, but in fulfillment of woman’s traditional role.

To emphasize women’s role, a variety of propaganda – postcards, cartoons, fliers, buttons, and banners [were distributed]. To make explicit their claim to the vote on the basis of motherhood, American mainstream suffragists also circulated a wide variety of comic postcards and cartoons depicting children. The children were appealing and, as juveniles, inoffensive. Children could get away with expressing impertinent and assertive messages sentiments in a way that was not permitted by their mothers. They could “demand” what would otherwise have been unacceptable for an adult woman. In a series of pro-suffrage postcards, the female children appeared assertive, positive, and cooperative. One such postcard depicted a little boy trying to steal a kiss from a little girl who is holding him at arm’s length and saying,” Suffrage First!” Another postcard featured a forlorn child who appeared to be the proverbial “Babe in the Woods” carrying a placard reading, ‘I Wish Mother Could Vote.'”

While magazines and other forms of media stressed the role of women as a housemaker, the lack of women illustrated in other roles prompted Gloria Steinem, a prominent women’s activist, to start her own magazine, Ms. According to the PBS documentary, ‘Makers: Women Who Make America’, Ms. Steinem created Ms. because magazines didn’t “speak to the truth of women’s lives. For the first time, women could tell the truth, read the truth, and get advice. Thousands of women got to know the women’s movement through Ms. magazine.” 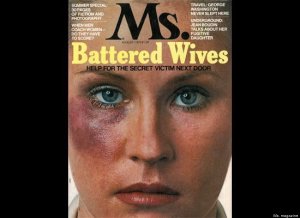 The magazine also became popular for developing a system to grade politicians on issues important to women such as abortion and birth control. Moreover, Ms. was critical in raising awareness about domestic violence. At the time, there were no domestic violence programs and no one talked about it. For the first time, people heard domestic violence mentioned and women became aware that this was happening to others.

By the 1970s, movies, advertisements, music, and television began depicting women who were strong and independent. In 1966, Marla Thomas broke TV taboo by playing an unmarried career girl in a new sitcom called ‘That Girl.’ Similarly in 1970, another sitcom was produced about an unmarried news producer that was titled ‘The Mary Tyler Moore Show.’

In 1970, women participated in a sit-in at the office of the ‘Ladies’ Home Journal’ to protest advertisements by companies that discriminated against women. They also took issue with the way in which the mostly male editorial staff depicted women’s interests. The protest lasted 11 hours until the male editor in chief gave the protesters 8 pages in the next issue to write about their concerns.

Founded in 1966, the National Organization for Women (NOW) fought for women’s rights and the Equal Rights Amendment. Similar to the National Association for the Advancement of Colored People (NAACP), NOW sought to achieve equal rights by looking for test cases to challenge discriminatory laws. One of their first cases began in 1967 with a woman in Georgia who sued the Southern Bell Company (now AT&T) because they would not promote her to a higher paid position due to her gender. After several appeals, a Federal Court found in her favor.

Many activists also fought against the quotas that medical and law schools had in place allowing only 5-10% of women in their incoming class. Check out this interesting statistic below!

Overall, I thought this was a great reminder of the struggles, innovations, and time it takes to see culture and laws change.  Hope you enjoyed reading about it!

This entry was posted on September 11, 2013 by Christina in Reports, Women and tagged United States, Women's rights.