Earlier this year, the Center for Strategic and International Studies (CSIS) hosted a panel on “Building Youth-Inclusive Democracies: Lessons from Kenya.” The panelists shared important lessons learned from Kenya’s ‘Yes Youth Can’ initiative to empower youth through leadership and economic opportunities. 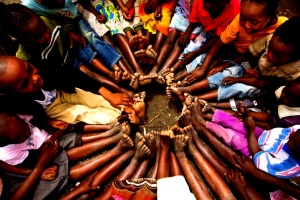 Start of the ‘Yes Youth Can’ Program

The Yes Youth Can program was born out of the violence that occurred after the 2007-2008 election. Congress committed an unprecedented amount of resources to help us develop this. This program is led by youth, managed by youth, and implemented by the youth. We are simply providing the tools to allow them to do the things they’re doing.

What really struck me is the commitment, and I haven’t seen this elsewhere, the commitment of youth for community service. That struck me as something that we should help promote.

What was phenomenal about this program was the rapid fashion in which the program was built up to scale. At USAID, we often struggle with having good boutique programs and very good local programs, but it’s difficult to build on those. It was the mobilization aspect and the commitment of youth that made this a success.  We want to take that positive experience and look at ways of replicating it. But it doesn’t necessarily have to be like Yes Youth Can.

Mike and I were part of the first group that went into Iraq in 2003. There was no youth policy and we tried to quickly return things to a sense of normalcy. For us, that meant getting kids back to school and that was one element that featured in this program, but it wasn’t enough. Only over time, we began to understand that when you have an economy collapsing and have unemployed youth, who are quickly taking up arms, you have to do something about it. That was a learning experience for all of us.

I also want to touch on being careful about doing no harm. In fragile environments, you have to understand the macro and micro environments. By that I mean, when I was in Afghanistan, we had really good programming taking place at the local level, but we had one tribe benefiting from the delivery of a program over another, and this exacerbated the situation. 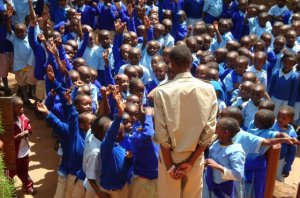 Tenants of the Yes Youth Can Program

When we talk about Bunge, we’re talking about an area that covers a few square kilometers. The Yes Youth Can program has 3 very important tenants. First, we build up the capacity of youth to become leaders. We started from the village level, where youth can come together and elect their leaders, and they can go all the way up to the national level. That helped bring unity among youth by forming a network where they could advocate for many other issues.

The second tenant of program is the Youth fund. This looks into issues of economic development for youth. We had grants that went up to $500 per group and we targeted 10,000 village groups. This was seed money to ensure that they get something at the end of the day and can contribute back to society.

The third tenant is the think tank. We’re trying to influence the policies of the government, so when they come up with policies, youth are already at the center stage. Out of more than 750,000 youth that underwent leadership training and development, we had a number who went out of the system and decided to go into politics. Since the program is non-partisan, anyone that wanted to go into politics had to leave because we don’t associate with any political party. There are 17 that got positions from our program.

How the Program Helped Mitigate Violence in Kenya

During the last round of elections, the youth were not idle. Initially (in 2007-2008), they were idle and they would become an easy target. This time it was expensive to buy youth. Initially, you just needed a few coins and youth would follow you, but this time youth had something to do for themselves, so village leaders needed to cough up a lot. On the think tank side, we mobilized youth to make sure they participated in presidential watch parties and contributed to the process. That is how we were able to mitigate incidences of youth violence.

Now, I know a lot of youth state senators in Kenya and that has not always been the case. We believe we will have a new crop of future leaders to change the things we really need.

Another challenge involved the development stages of the organization. We grew very fast and there was a fear that we could crumble. Now we’re looking at how to transition as donors leave because we want to ensure the program continues. To do that, we’re trying to go back to the youth and make sure that they own the program and contribute actively. Youth often think when money comes from the donor, it’s the donor’s money, and we can spend it. But if it’s from your pocket, you really try to follow what happens to the one dollar I gave out last time.

Another challenge was unemployment. Youth are fending for themselves and participating in the program is voluntary-they’re not paid anything. We need to work on this by moving away from something completely voluntary to subsidizing something for the time they’re spending. One other area of concern was the misuse of information. We had social media and communication lines, but there were instances where people would misuse or misinform others. We have to make sure we’re both guarding and giving freedom to pass information. 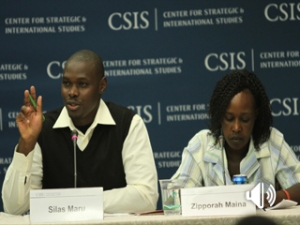 Number of Bunge’s in Kenya

Most recent figure is upward of 1 million youth in the program. We have about 20,000 registered youth groups in 25 out of 47 counties in Kenya. We’re trying to roll out to the remaining counties. The initial hot spots have turned and now we have new hot spots and new areas that need to be dealt with.

I was trained as a trainer of trainers. Being in that position, I was able to mobilize and form over 20 bunge youth groups. In these groups I trained them in financial literacy, how to develop a business plan, and business proposal. During the 2008 elections, most youth were unemployed and idle and it was easy for politicians to manipulate them. But this time, with the Yes Youth Can program, youth were empowered and with the micro-grants, were in a position to be independent. Most groups had income-generating activities based on their interest such as greenhouses, making bricks, and poultry making.

The program also had a gender component. I was among the mentors for young women and we mentored young women and partnered with the private sector and coca cola. As a result, young women were given something to do. Through women’s outreach campaigns, women were taught about their rights because most don’t know their rights as compared to the men. In Kenya, we see leadership belongs to men, but it is not that way, it belongs to all of us.

In my Bunge, the place was a hot spot in the 2007 and 2008 election. One of the challenges we faced was the fact that most of the youth in the community are not patient. After youth form a youth group, we tell them they will be given funds, but they expect funds the next day. Some youth may also misappropriate funds.

In Kenya, when politicians are given a ministry, they seek to benefit themselves first. So youth think, as President of a Bunge, they will be the first beneficiary and take it for themselves. It’s a challenge telling them to use the money a certain way and follow certain procedures.

Youth in the community don’t like volunteer work. If you tell them you’re going to work voluntarily, they expect to put something in their pocket afterward. Most of the youth in my community are also unemployed. Most have completed their high school or university, but are not employed. Accessing opportunities is a big problem.

Another problem is education. Some youth would like to continue with their studies, but there’s no money to continue their education. In the business sector, some youth may have good business ideas, but they don’t have the capital to start businesses. Sustainability is also an issue because young people want things done instantly. 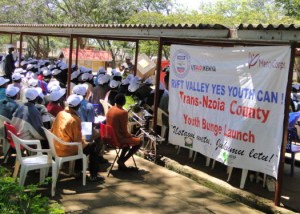 I was in Niger Delta earlier and one of the things I looked at was youth unemployment. For markets to function, there needs to be trust. In many transitional environments, there’s market dysfunction, because there’s very little trust between different groups. In Niger Delta, they had lot of young people who wanted jobs and the local sector wanted to invest, but with so little trust between groups, it was very difficult to get effective economic activity going.

In Kenya, many politicians view young people as weapons they can use in their political fight with others. A leadership or employment program wouldn’t raise eyebrows in a stable setting, but it becomes politicized and high risk in transitional countries (like Kenya and Afghanistan). First, you have to be very aware of dynamics occurring in transitional states. You have to adapt programs to directly engage with those dynamics and you can’t ignore it or programs won’t work. You have to accept that these are going to be very high-risk programs.

First, the program was explicitly designed to be youth-led and it’s been enormously successful in that respect. Seventeen of the leaders in the program were elected to office. Youth-led is something a lot of groups pay lip service to, but making it real is quite challenging. Youth leadership, like adult leadership can be difficult because of the range of personalities and finding authentic youth leaders can also be difficult.

Another thing interesting about this program is that it tried to reach scale. When trying to deal with electoral violence, doing a small boutique project in one area isn’t useful when the rest of country could blow up. Part of the success of this program was the size of the grant. But another huge part was social media and new technologies that reached youth in very aggressive and very creative ways.

One of the lessons we learned had to do with it being an integrated program, which meant it was tilted towards the entrepreneurship side, but leadership was also an important aspect.  As elections approached, we could pivot from a job focus to a leadership focus. That integrated nature was very important.

This entry was posted on July 1, 2013 by Christina in Event Recap and tagged Entrepreneurship, Kenya, Leadership, Youth.